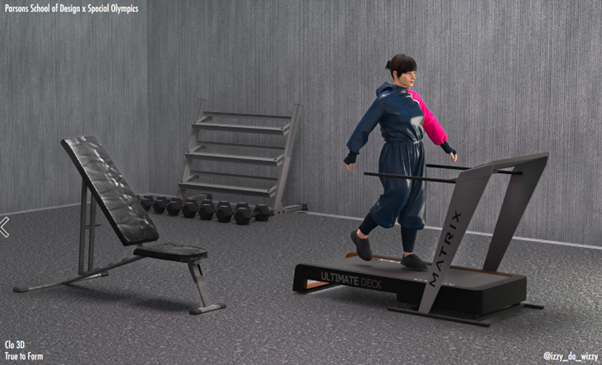 In the Spring 2022 Semester, Special Olympics and The New School’s Parsons School of Design teamed up with TrueToForm to offer their fashion design students the opportunity to work with Special Olympics athletes to create sustainable and tangible change in inclusive apparel.

Parsons School of Design is one of the top ranked design schools in the world. It is a place where designers, artists, and innovators come together to challenge convention and to create positive change. It seems only natural that they would be at the forefront of meaningful industry change.

Special Olympics is a global movement tackling the stigma, isolation, and injustice constantly faced by people with intellectual disabilities. Special Olympics strives for the full social participation and inclusion of people with intellectual disabilities by delivering high-quality training and competition which allows people with and without intellectual disabilities to play on the same field. This collaboration aims to amplify the voice and mission of Special Olympics in the world of sport and fashion, while students and future industry leaders can learn about the importance of adaptive clothing and inclusivity across all areas of the industry. With a focus on both form and function, students were asked to create human-centered sportswear that considered any and all factors that might exclude an individual.

“[The collection] generates the idea of neuromuscular energy in pattern design and focuses on functionality, aesthetics, and transformation in form.” - Yihan (Audrey) Chou

This year, TrueToForm was brought in for the first time as part of the collaboration. TrueToForm’s digital workflow solution automated the traditionally laborious process of taking manual tape measurements for made-to-measure apparel production. Students used TrueToForm to obtain the body measurements of three Special Olympics powerlifting athletes, providing an efficient alternative to the in-person or Zoom fitting involving 50+ measurements required for technical sportswear design. This was particularly impactful because of the restrictions due to the COVID-19 pandemic. With the TrueToForm mobile app, the athletes could take a body scan at home and share their custom avatars with the students remotely. Students were then able to import the athletes’ avatars directly into the 3D design software CLO3D to prototype and create their designs virtually.

At the end of the semester, Parsons showcased the inspiring creations that students made using TrueToForm and CLO3D. Among the attendees of the presentation were U.S. Special Olympics athletes Jessica Spitz, Matthew (Teddy) Graham and Heather Reising, Parsons students and faculty, and special guest critic Nigel Barker.

Parsons first offered this course in January 2020, and it has since remained a permanent fixture on the curriculum. Design students were tasked with bursting the traditional ‘designer bubble’, challenging them to design with a focus on purpose, function, and style for athletes with different needs and intellectual disabilities.

“Throughout this course, it was truly impressive that the students were able to capture the athletes in many different ways and resonate those stories with themselves.” - Lucy Jones

Lucy Jones and Ranjit Lalvani co-taught this year’s class. Ranjit Lalvani has been a part-time faculty member in the School of Fashion since 2002. Ranjit has held long-term designer-level roles at Nicole Miller and Shameeza Embroideries. He most recently served as a freelance designer for Shameeza Embroideries working with fashion brands such as Ralph Lauren, Donna Karen, Vera Wang, and Carolina Herrera, among others. Lucy Jones is the CEO and founder of FFORA. She was named Parsons Womenswear Designer of the Year in 2015 and won The New School’s New Challenge social innovation prize the same year. She has continued to investigate universal fashion and was a semifinalist in the 2015 Eileen Fisher X CFDA Social Innovator competition. In 2016, Jones was also included on Forbes’ 30 under 30 list of notable young creative talents.

“In fashion design, the process of inspiring yourself used to be on a superficial level. We didn’t really think about anything other than the quality and aspect of the clothing and we call it the designer bubble. The best way to burst the designer bubble is to make students start thinking about different body types and marginalized communities who may have been previously left out of contemporary fashion design.” - Ranjit Lalvani

The students showcased their proposed designs in a thesis session critiqued in part by Nigel Barker, fashion photographer and TV personality. Nigel Barker is a champion ambassador for the Special Olympics, and is an internationally renowned photographer and entrepreneur who opened his New York studio in 1996. He served 17 seasons as a photographer and judge on the hit TV show America's Next Top Model, which airs in over 140 countries, and hosted Oxygen Network's modeling competition series, The Face, starring alongside Naomi Campbell. Barker's latest hit show Top Photographer premiered to rave reviews, and a second season is in the works.

“These sorts of collaborations are so important because this is how we step forward and make a difference. Having worked in the fashion industry for years, change is often hard and does not happen easily. It happens when people work hard, work together and strive to make a difference… without pushing the boundaries of fashion design, you won’t make a difference.” - Nigel Barker

By the end of the course, students expressed gratitude to the Special Olympics athletes for teaching them how to think more holistically about adaptive clothing designs. TrueToForm’s 3D body scanning solution allowed the students to efficiently and conveniently develop made-to-measure clothing and placed inclusivity at the forefront of fashion design.

Create Your Own Avatar For Free Using Our iOS Scan App